Dairy cooperatives support livelihoods of thousands of women in India

Dairy farming is one of the most important sources of income and nutrition for rural communities in India. Dairy enterprises not only feed rural communities, they also supply milk to urban centres providing high quality protein and other essential nutrients to the population. Driven by rising urbanization and a growing middle class, demand for milk has increased substantially in recent years in India, including in the northern state of Uttarakhand. Strengthening the efficiency of the Uttarakhand dairy market offers major opportunities to smallholders to expand production and sales of milk.

Unorganized markets, transportation difficulties and inaccessible input and extension support services are but a few of the obstacles facing villagers wishing to start dairy businesses in Uttarakhand. The lack of storage facilities acts as an incentive to farmers to keep unsold milk and mix it with the next day’s batch, causing higher levels of milk spoilage and contamination, as well as financial losses. Faced with these obstacles, increasing milk production and making a reasonable profit is extremely difficult for Uttarakhand’s small-scale dairy farmers. 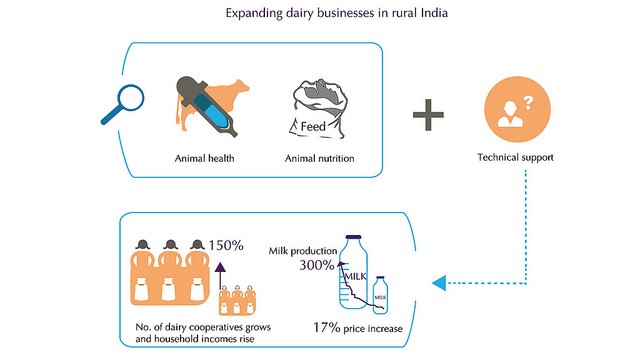 Ensuring women equal access to, control over and ownership of economic, land and other resources, India (Photo credit: ILRI/Bethlehem Alemu and Apollo Habtamu)

This situation began to change in rural Uttarakhand in 2008 when the Himmotthan Society started assisting a group of dairy-farming women to establish self-help federations, pooling their resources and knowledge to improve milk quality and cattle productivity. The women formed livestock producer groups: one group per village, with 12–15 villages per federation, and one dairy enterprise per federation. Each federation received a grant to purchase equipment for transport, storage and the testing of milk quality. Milk collection centres were established within 16–20 km of each dairy enterprise and 40 km from end markets, and vehicles were hired by each federation to transport the milk to market. But access to feed, veterinary health and breeding services and technical knowledge to improve milk yields remained a problem.

A year later, the International Livestock Research Institute (ILRI) teamed up with Himmotthan to provide research and technical support to help address the major productivity constraints facing Uttarakhand’s small-scale farmers. ILRI research identified measures to increase the supply and nutritional quality of animal feed by increasing the fodder yield from wheat and barley, while also increasing the grain yields for humans. ILRI scientists also supported the training, including development of extension materials, of 200 young villagers to become artificial insemination technicians and preventative health-care workers. Better nutrition, together with veterinary treatment, helped improve the health and fertility of the animals. This combination of research-tested interventions, technical support and training has delivered striking improvements in productivity and sales.

Eight years on, Himmotthan and ILRI have rolled out a dairy business cooperative model for hundreds of women farmers in remote areas. Twenty-five small dairy enterprises, up from 10, now support the livelihoods of 5,680 women farmers in 320 villages in Uttarakhand, demonstrating that rural dairy enterprises are viable, generating incomes for farmers and delivering high-quality products to poor consumers at competitive prices. Milk prices and production levels have increased by 17% and 300% respectively. There have been clear improvements in the livelihoods of families involved in the federations. The women have used the income from dairy production largely for household expenses, such as school fees, but have also invested in new farm inputs. Some households have also purchased crossbred improved livestock, such as poultry.