Livestock is the world’s fastest-growing, highest-value agricultural subsector, accounting for about 40% of agricultural gross domestic product globally. Driven by rising incomes, demand for animal-source foods in Africa and Asia is expected to increase up to 200% by 2030. Efficient crop and livestock production and natural resource use will drive employment, environmental, nutrition and income gains in a subsector likely to be dominated by smallholders.

In 2012, the CGIAR Research Program on Livestock and Fish began working in nine countries to increase access to animal-source foods by the poor by strengthening targeted value chains in which the poor benefit significantly. The initiative—led by the International Livestock Research Institute (ILRI)—took a solution-driven research-for-development approach. In Uganda, scientists selected the pig value chain, a major livestock source for more than 1.1 million households, because of its relatively high return-on-investment potential. Pigs grow quickly, feed on leftover food and crop residues, can be sold to meet household needs and provide investment capital to grow crops. Investment in research offers major opportunities to increase productivity and build partnerships to enhance knowledge and technology transfer. 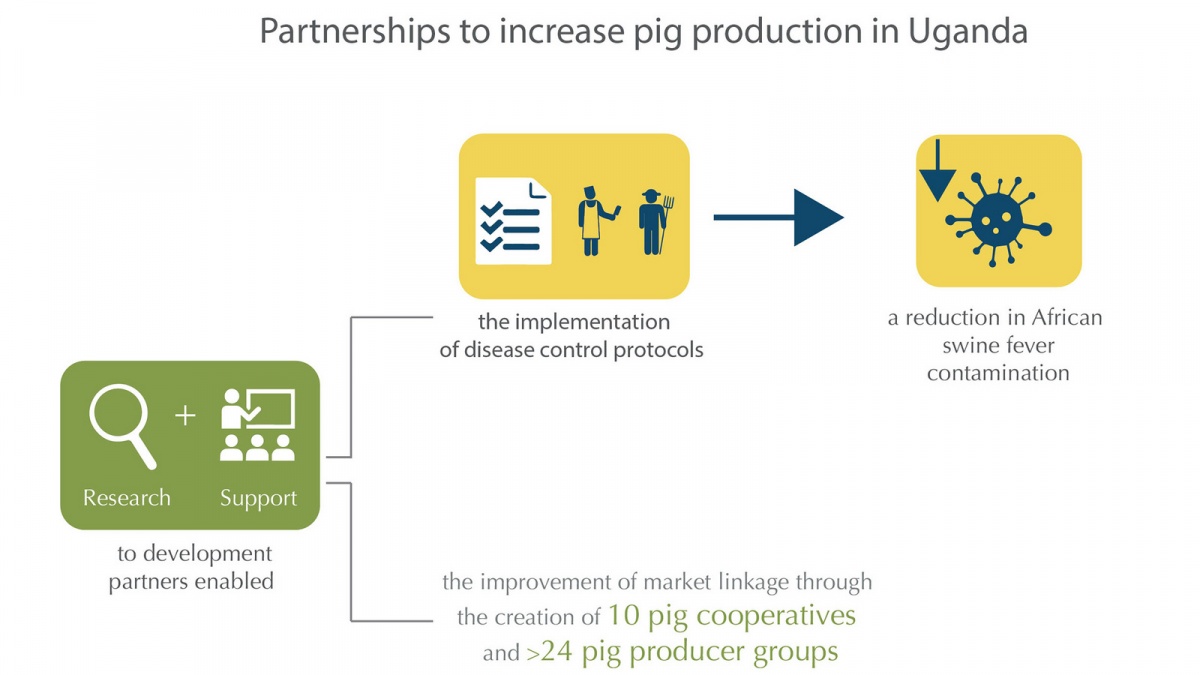 ILRI mapped the stakeholders in five main pig producing districts and identified the opportunities and challenges along the value chain. Scientists identified disease prevalence as a key production constraint—particularly the highly contagious, often fatal, African swine fever. The findings informed priority interventions along the pig supply chain, including the development and testing of tools and training materials for the control of African swine fever. Local district extension and veterinary officials then supported producers to participate in best-bet interventions rolled out as pilot programs, such as the application of farm-level protocols to prevent and control disease outbreaks and capacity building of butchers on appropriate pig slaughter and pork hygiene. ILRI-led evaluations involving 960 farmers and 300 input and service providers, traders and butchers revealed significant progress in the adoption of practices to prevent the spread of African swine fever.

Drawing on ILRI-led research and technical support, local extension and veterinary officials, pig producers and traders, service providers and retailers established multi-stakeholder platforms. The platforms have since become dynamic at local, regional and national levels, raising awareness of the importance of the subsector as a public policy and investment priority. For instance, the 2016–2020 government agriculture strategy highlighted the role of the pig subsector in protecting nutritional security and set aside USD5.5 million to control African swine fever.

Ugandan pig farmers readily embraced collective action. The regional platforms have facilitated the creation of market linkages, for example, between input suppliers, auxiliary service providers and farmers. In the greater Masaka region, the stakeholder platform catalysed the establishment of 10 pig farmer cooperatives and dozens of pig producer groups. The pig cooperatives in turn came together to establish the Greater Masaka Pig Cooperative Union to further strengthen their advocacy activities and improve pig production and marketing in the region. And the national multi-stakeholder platform has begun engaging with ministry officials on the incorporation of improved standards into the revised national animal feeds bill, a process which is ongoing.

The CGIAR Research Program on Livestock will build on this model to enhance efficiency of the pig value chain through the adoption of improved technologies by increasing the number of small- and medium-scale farmers and businesses and market-oriented policies in Uganda. The Uganda pig value chain is expected to make important contributions to the ambitious 2022 program targets, which include poverty alleviation, inclusion and equity for nearly 11 million women and young people worldwide through the adoption of improved technologies and market-oriented practices.