Livestock contribute greatly to livelihoods and food security in Africa, yet they are both vulnerable to climate change and a major contributor to greenhouse gas (GHG) emissions, a known driver of climate change. Climate change is expected to alter the quantity and quality of available animal feed and impact livestock directly through increased heat stress, changes in water availability and a greater range of livestock diseases. And higher levels of poverty in Africa exacerbate the effects of GHG-induced climate change on vulnerable populations.

Existing estimates suggest that the livestock sector in Africa contributes to more than 70% of the continent’s agricultural GHG emissions, mainly due to methane and nitrous oxide emissions, two particularly potent GHGs, predominantly from cattle and their manure. The implementation of effective mitigation strategies relies on accurate GHG emission data. But what if the underlying assumptions upon which these GHG emission estimates are based are inaccurate? 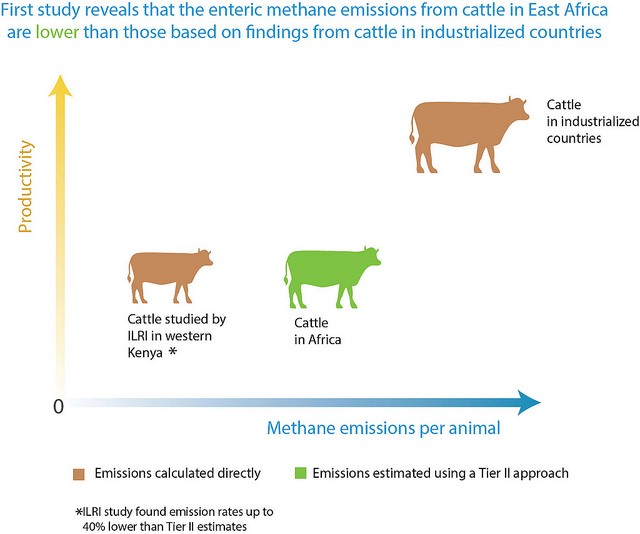 The measurement of GHG emissions faces significant challenges in quantifying the environmental impact of livestock in Africa. Guidelines to estimate GHG emissions provided by the Intergovernmental Panel on Climate Change (IPCC) suggest an approach for regions in which in-situ data is scarce or unavailable, such as sub-Saharan Africa. This approach involves extrapolating estimates, referred to as Tier I estimates, based on the knowledge and GHG emission factors of livestock systems for farm animals raised in high-income countries often on sophisticated diets tailored to maximize productivity. These livestock systems, however, are mostly high-intensity dairy and beef farming systems with very different breeds, feeding regimes, veterinary services, climatic regions and landscapes than those found in sub-Saharan Africa.

The assumptions upon which the extrapolation is based may well be misleading; in other words, there may be large uncertainties in their applicability to African livestock systems. Three years of research by scientists at the International Livestock Research Institute’s (ILRI) Mazingira Centre has produced the first series of in-situ GHG emission estimates from livestock, manure and soils in Kenya, referred to as Tier II estimates. The preliminary results indicate that the actual enteric methane emissions from cattle in small-scale livestock systems are up to 40% lower than current IPCC Tier I estimates. Furthermore, GHG emissions from livestock manure and urine applied to soils in western Kenya are between 50% (methane) and 90% (nitrous oxide) lower than the IPCC estimates.

African governments are working to ensure that agriculture contributes to climate change mitigation by including projected livestock emissions in their National Determined Contributions, following the 2015 Paris climate accord. However, available GHG emissions data is unreliable as it is based on extrapolating knowledge gathered in developed countries and policy responses may be inaccurate if based on existing Tier I estimates.

A body of knowledge needs to be built upon which to draw sounder conclusions for policymakers wishing to achieve mitigation targets through interventions in the livestock sector. Countries require accurate in-situ baseline (Tier II) GHG emissions estimates upon which to measure progress towards minimizing GHG emissions. African nations need to know whether the practices they are adopting are truly contributing to more sustainable and resilient food production, while reducing the environmental impact of their livestock.

The Mazingira Centre research findings present a snapshot of the GHG emissions from a few cattle breeds in selected livestock systems in western Kenya; more work is required before reliable baseline data can be estimated for the country and ultimately the continent. The new data will be incorporated into the IPCC Guidelines for National Greenhouse Gas Inventories and eventually used to update the existing Tier I estimates. ILRI is also testing and quantifying potential mitigation strategies based on the recently derived data. In the future, improved Tier II estimates will help African states report more accurate GHG emissions to the United Nations Framework Convention on Climate Change and develop and implement more targeted interventions.