The remarkable life of Alexandre Yersin

Alexandre Yersin (1863-1943) was a Swiss-French polymath and physician who worked in Vietnam during the first half of the twentieth century. He made invaluable contributions as a bacteriologist, serial entrepreneur and public health administrator but is most beloved in Vietnam for his work as a simple country doctor. 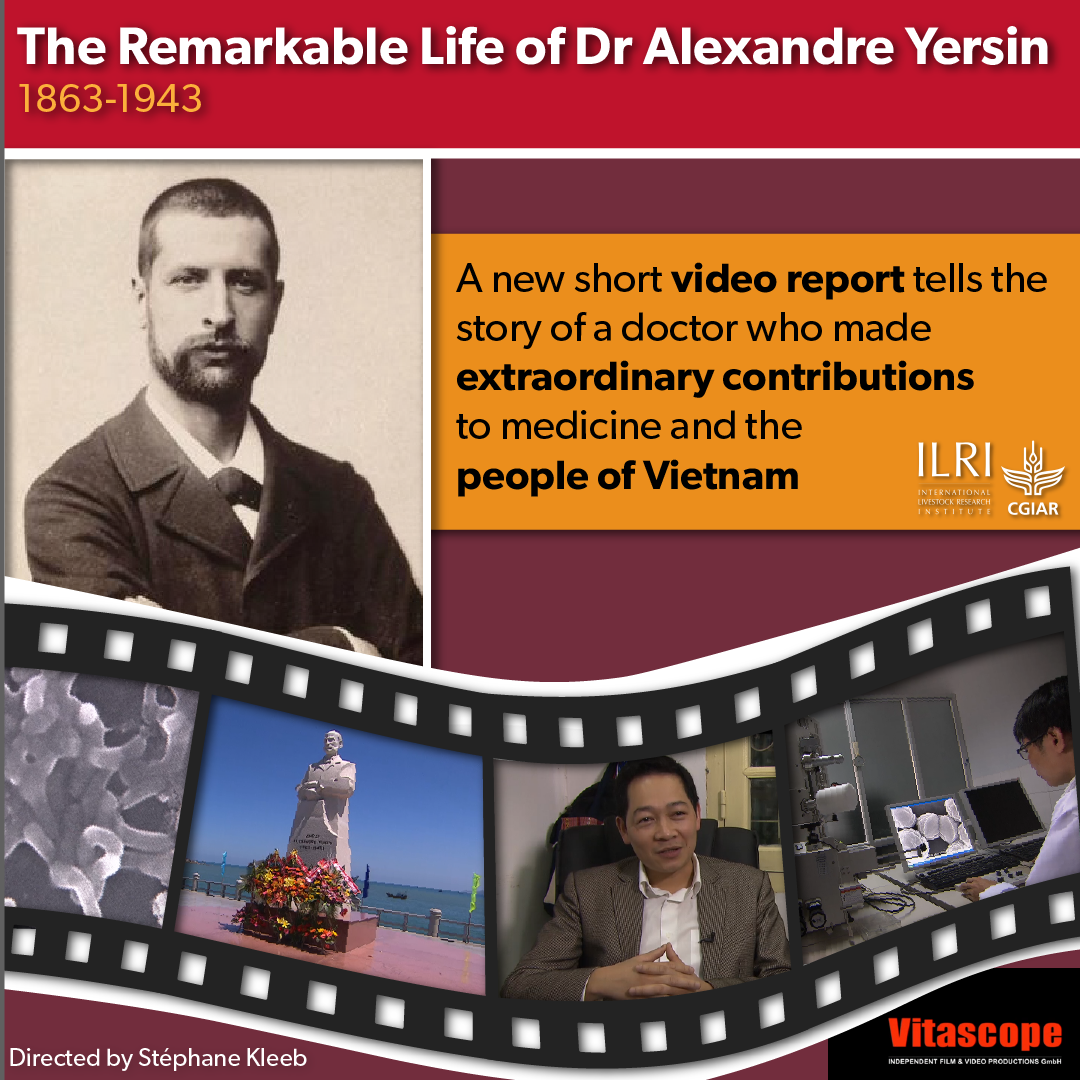 Hung Nguyen-Viet – the protagonist in this report – is the co-leader of animal and human health program at the International Livestock Research Institute (ILRI) and worked for Swiss TPH and Hanoi University of Public Health. Released on the 79th anniversary of Yersin’s death, the documentary reflects on how his exemplary life can be used as an inspiration for young people, particularly those in health research and development.

Yersin is best remembered among the medical community today for his discovery of the bacillus responsible for the bubonic plague, which was later named in his honour: Yersinia pestis. That discovery, in Hong Kong in 1894, ironically came about in part because Yersin, then a relatively junior figure, did not have access to the latest scientific equipment, such as incubators, which inadvertently heated the cold-loving bacillus beyond its viability. Yersin also established that the same bacillus that infected people, Yersinia pestis, infected rodents, thus undeniably establishing the long-suspected means of transmission for the disease.

Yersin returned to Hanoi, Vietnam in 1895, where he helped establish the Indochina’s first medical school in 1902, serving as its director for the first two years. The Hanoi Medical School is now the largest medical school in Vietnam, but back then there were hardly enough teachers to cover the curriculum. ‘Yersin taught himself physics, zoology, a bit of everything to cover the gaps’, says Hung—which we know about from the weekly letters he wrote home to his mother.

‘Because he is associated with that era, some people think of Dr Yersin as a colonialist’, says Hung, addressing head-on the primary concern about Yersin’s legacy. ‘But when you look at all the documents, how he loved the local population, helped the sick, the children of the village and so on, you see that this is not the image of a colonizer.’

‘For young researchers like me,’ says Hung, ‘one of Dr Yersin’s most inspiring qualities was his ability to work across disciplines—what today we call his transdisciplinary approach’.

‘He worked on what we would later call One Health, he worked on zoonoses, he mobilized people to work in various disciplines, and he mobilized resources. All of the things that we are doing today, he was doing a century ago’ says Hung.

Among his other achievements, Yersin established plague anti-serum manufacturing companies in several places in India and Vietnam; opened an agricultural station which successfully acclimatized quinine for local consumption and rubber for export; and founded the site for a new town that became a favourite among the expatriate French for its high altitude and European-like climate. Later in life, he was named honorary director of the Pasteur Institute in Paris, with which he had been affiliated for many years.

But it is in Vietnam that his legacy is most keenly felt, in the institutions he founded or that bear his name, and in the memories of people he served faithfully for many decades.