Cameroon, like other African countries, relies on agriculture as a main economic activity with livestock employing at least 30% of the country’s rural population. The livestock sector in Cameroon is crucial to its economic growth, food and nutrition security, and job creation. Forages of African origin, such as Brachiaria have been instrumental in the transformation of the livestock sector in many parts of the world including tropical America, Australia and East Asia. But the potential of native forages to alleviate livestock feed shortage in Africa has been little explored.

In 2012, the Biosciences eastern and central Africa-International Livestock Research Institute (BecA-ILRI) Hub started the ‘Climate-smart Brachiaria Program’ in partnership with the National Agricultural Research Systems (NARS) and development partners in sub-Saharan Africa. This program aims to increase livestock productivity in the region by providing high-quality and climate-resilient Brachiaria grass.

Paul Ko Awono, an Africa Biosciences Challenge Fund (ABCF) fellow at BecA-ILRI Hub from the Institute of Agricultural Research for Development (IRAD) in Cameroon, is researching how to improve Brachiaria seed production technology in Africa. His study, which is supervised by Sita Ghimire and Kingsley Etchu from BecA-ILRI Hub and IRAD, involves collecting information about Brachiaria seed production systems in the North and Adamawa regions of Cameroon, evaluating agronomic performances of Brachiaria landraces and improved cultivars, and examining the quality of Brachiaria seeds produced by farmers in the country. In Cameroon, Brachiaria seed is often traded as a cash crop and is a source of income for many farmers.

So far, Ko Awono’s research has revealed that the size of the farmlands dedicated to Brachiaria production are smaller (0.25 to 0.5 ha) in the North region compared to those in the Adamawa region (1 to 15 ha). His research also shows that Brachiaria seed yield is low in both regions (≤ 300 kg/ha). Major constraints on Brachiaria production in both regions include weed infestation, wandering animals and lack of market for Brachiaria seeds. Additionally, he has found that Brachiaria landraces mature earlier and are better adapted to harsh environmental conditions than improved cultivars. His research has also uncovered that Brachiaria seeds samples produced by farmers in the two regions are of variable qualities (poor to excellent) and some seeds samples are superior for germination than the improved cultivars. 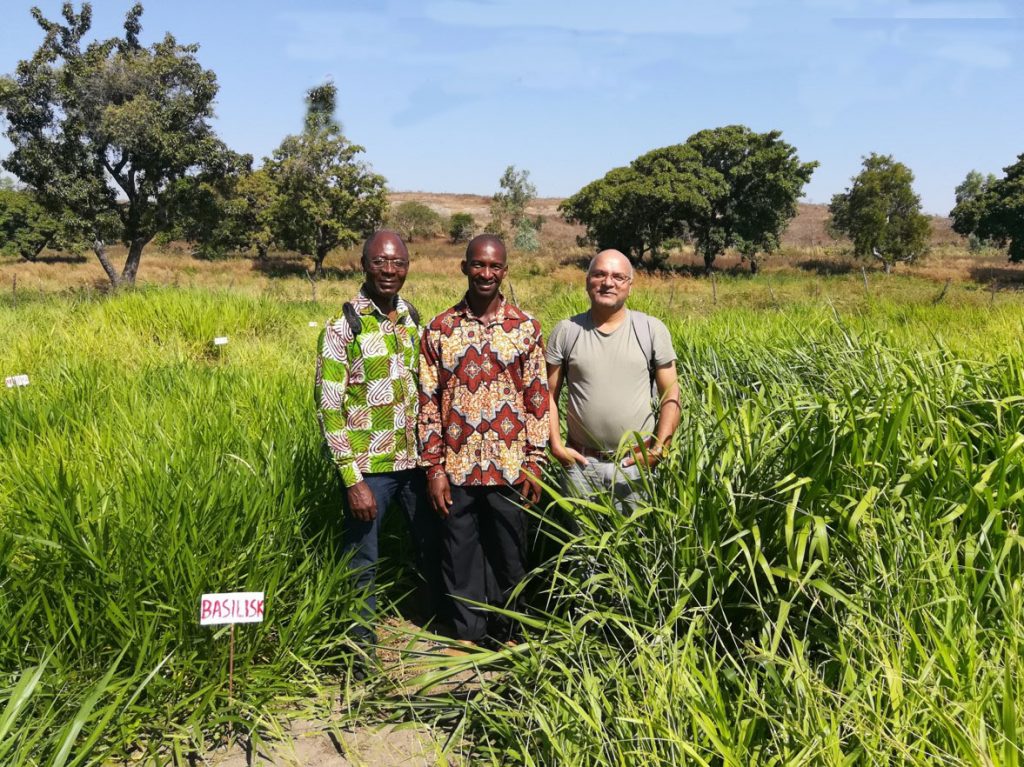 Paul (middle) with his supervisors at Brachiaria experimental plots at Garoua, North Cameroon

Paul’s research revealed that the size of the farmlands dedicated to Brachiaria production by a farmer were smaller (0.25 to 0.5 ha) in the North region as compared to Adamawa region (1 to 15 ha). His research also indicated that Brachiaria seed yield was low in both regions (≤ 300 kg/ha) and the major constraints of Brachiaria production in both regions were weed infestation, wandering animals, and lack of market for Brachiaria seeds. Additionally, Brachiaria landraces were earlier in maturity and were better adapted to harsh environmental conditions than improved cultivars. His research also uncovered that Brachiaria seeds samples produced by farmers in North and Adamawa region were of variable qualities (poor to excellent) and some seeds samples were superior for germination than improved seeds.

Ko Awono recognizes the role of the ABCF fellowship, which he received in 2019, has played in his work as a forage researcher. ‘It gave me several opportunities: I learnt how to write research proposals, set up agronomic trials, and collect, analyse, and interpret data.’ He also learned several techniques related to seed quality determination in the laboratory and greenhouse settings.  ‘The training and mentorship I received at BecA-ILRI Hub has played a key role in my work. It helped me to improve my scientific skills, which has made me a better researcher. ‘I am using the skills and knowledge I gained to help Cameroonian farmers increase the quality and quantity of Brachiaria seeds, which will improve their livestock production, incomes and livelihoods,’ he concludes.

The effects of climate on decomposition of cattle, sheep and goat manure in Kenyan tropical pastures

Multispecies pastures for increased productivity and provision of ecosystem services

END_OF_DOCUMENT_TOKEN_TO_BE_REPLACED

To train farmers on forage agronomy and conservation techniques that will help them overcome livestock feed shortage during the dry season and to train Community Animal Health Workers (CAHWs) on common livestock diseases and their treatments, to equip them with material and medicine kits and...