Skip to main content
Got a spare 5 minutes to help us improve our website?
I'll do itNo thanks
6 min.

A new model of pathogen transmission in developing urban landscapes

ILRI scientists recently published a paper in the journal Nature Microbiology. Reproduced here is the press release published in EurekAlert.

Scientists from the International Livestock Research Institute (ILRI), the University of Liverpool, the University of Edinburgh and elsewhere have traced how diverse strains of a common pathogenic bacteria spread in Nairobi, Kenya, shedding light on how diseases might emerge and proliferate within a complex city—and how they might best be controlled. The study appears in the April edition of Nature Microbiology under the title ‘Population genomics of Escherichia coli in livestock-keeping households across a rapidly developing urban landscape’.

Urban settlements in low-income countries are sites of enormous economic energy and cultural dynamism but also potential havens for new and emerging diseases, particularly zoonoses and antimicrobial-resistant bacteria. In Nairobi, Kenya, some 60 per cent of the population live in crowded low-income settlements characterized by poor sanitation and home to a wide variety of livestock and urban, synanthropic animals (undomesticated animals that like in close proximity to and benefit from humans such as rodents and scavenging birds). Yet relatively little is known about how bacteria are shared among hosts and potential reservoirs, and how such hosts and reservoirs themselves create connectivity between different sections of the city.

‘These settlements are mega concoctions of people and animals’, said lead author Dr. Dishon M. Muloi, currently with ILRI and former PhD student at the University of Edinburgh, ‘with a chance of a flow of bacteria from either direction, from animals to humans or from humans to animals’.

In the most extensive epidemiological study of its kind, a team led by Professor Eric Fèvre of ILRI and the University of Liverpool sampled Escherichia coli from humans, livestock and peri-domestic wildlife in 99 households across Nairobi. ‘We wanted to understand the urban environment through the eyes of an organism that could move between hosts and potentially create a pathogenic problem,’ said Fèvre. ‘We know that urbanization is a risk multiplier for emerging diseases, but we need a better understanding of how the physical environment influences pathogen emergence and transmission.’

E. coli was chosen as a proxy for bacteria in general because of its ubiquity and because the tools for understanding its genetics are already well developed. 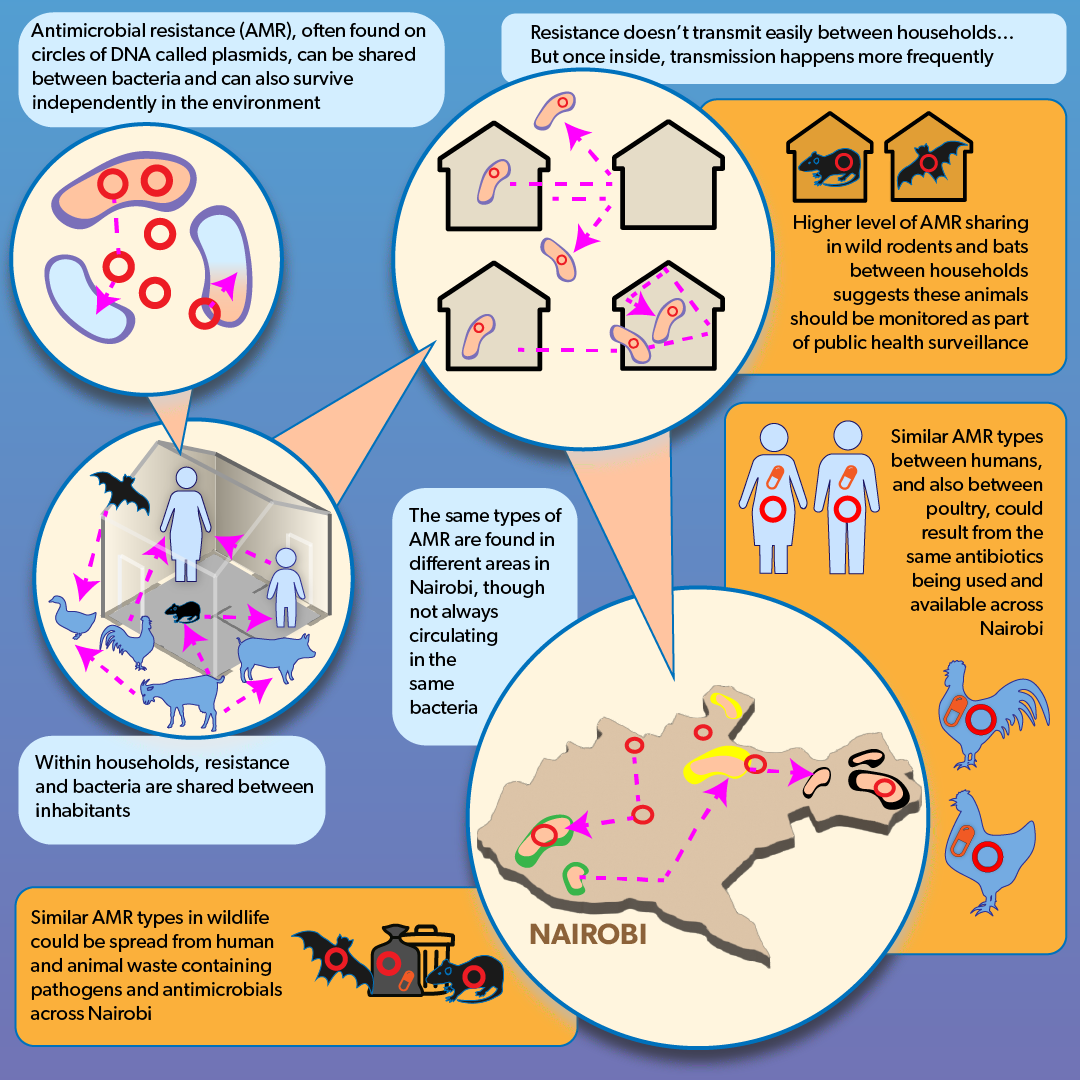 The findings were sobering. The first is that the diversity of bacteria are extensive: If you find an organism in one location, you’re likely to find it in a wide variety of locations, not only within Nairobi but globally. Secondly, the study found that pathogens are being shared by humans and between human and animal populations. ‘The same strain of E. coli that we find in a chicken might be found in a human’, said Muloi.

This result is particularly concerning because of the widespread and somewhat indiscriminate use of antibiotics in both humans and livestock in many developing countries—raising the spectre that antimicrobial-resistant bacteria may emerge in one organism and move to others.

In fact, since humans and livestock have similar genetic mechanisms for resistance, it may not be the bacteria itself that transmits but the resistance mechanism that is independent of the bacteria. Known as plasmids, these are independent bits of DNA that can move from one bacteria to another. ‘They have their own population biology that we are only beginning to understand’, says Fèvre.

But perhaps the most intriguing finding is that households serve as the key gateway through which bacterial transmission occurs. ‘Those within a household, including humans and animals, share bacteria’, explains Muloi. ‘But then from one household to another, there is something like a guard, a security person, who will ensure that you don't cross that particular barrier. So while sharing commonly occurs within the household, the household selects, by its own particular micro-biology, which bacteria to admit.’

‘To get in the door of the house might present some difficulties,’ says Fèvre. ‘But once it gets in, then it will infect everybody who's in there and so to speak lounge very comfortably on the living-room sofa.’

The household transmission model offers some critical lessons for the study and surveillance of future pathogens. As Fevre explains: ‘We often discuss transmission using the analogy of a wave, but in fact it's a story of multiple short infections or transmission events that then lead to a multitude of infections within those micro populations. It's not moving as a wave, in other words, but it's moving through a much more structured series of events. So we now have a much better understanding of how cities both can be colonized by new infectious agents, and how those infectious agents spread through a complex city. And knowing that we can start to think about how to control those events and stop them from happening.’

Ultimately, as Muloi explains, the lessons learned in the project have implications not just for the developing nations: ‘The E. coli in Nairobi represents the E. coli across the entire world. What is being seen in Nairobi today could easily be in New York or Paris by tomorrow morning.’

The study is part of the multi-centre ‘Epidemiology, ecology and socio-economics of disease emergence in Nairobi’ project funded by the UK Research Council Environmental and Social Ecology of Human Infectious Diseases (ESEI) initiative.

Dr. Carolyn Johnson, a programme manager at the Medical Research Council, said: “The Environmental and Social Ecology of Human Infectious Diseases initiative, which was established to respond to new and emerging pathogen threats, was developed to support novel approaches to study the ecology of infectious disease.

“This MRC funded project is an excellent example of a novel, interdisciplinary project, aiming to tackle the growing problem of E. Coli infection at the intersection between livestock and humans.

“The project involved both the national and international research community and has the potential to significantly aid our understanding of antimicrobial resistance.”

Dr. Bryan Wee, Senior Research Fellow at The University of Edinburgh and co-lead author of the paper, said: "Understanding more about transmission of microbes between livestock and humans is crucial to protecting health, globally. This paper is an excellent example of work co-led by The Universities of Edinburgh and Liverpool as part of a wide collaboration, working with the team in Nairobi to offer insights of global relevance. The rapid development of the city along with practice of keeping livestock within urban households has offered a powerful setting to develop our understanding of how antimicrobial resistance arises."

N.B. The infographic illustrating the story is by Annabel Slater, is titled: A New Model of Pathogen Transmission in Developing Urban Landscapes, and is available for reproduction under CC BY-ND