Interventions to relieve animal losses due to infectious disease translate into increased consumption of protein-rich diets by boys and girls—and ultimately into improved growth outcomes for both. This outcome may seem logical but for various reasons has been exceptionally hard to test. Now, it has been rigorously established by a longitudinal, randomized, controlled trial study.

The two-part study found that vaccination for Newcastle disease, the most common cause of mortality in village chickens, resulted in increased household flock size and increased dietary intake of protein and micronutrient-rich foods by young children. Most importantly, this change in diet led to increased growth in children, compared to children in homes where chickens were not vaccinated.

The research is especially critical since impaired growth and child development from poor nutrition, also known as child stunting, is common in rural Kenya and other lower-income countries.

“We had noticed families who fed their children high-protein foods had better outcomes in terms of preventing stunted growth in children, and we wanted to look for ways to improve growth given the resources they already had,” said researcher Dr. Elkanah Otiang, who led the studies as a Washington State University and University of Nairobi graduate student in his home nation under the Kenyan Medical Research Institute--Centre for Global Health Research in western Kenya. 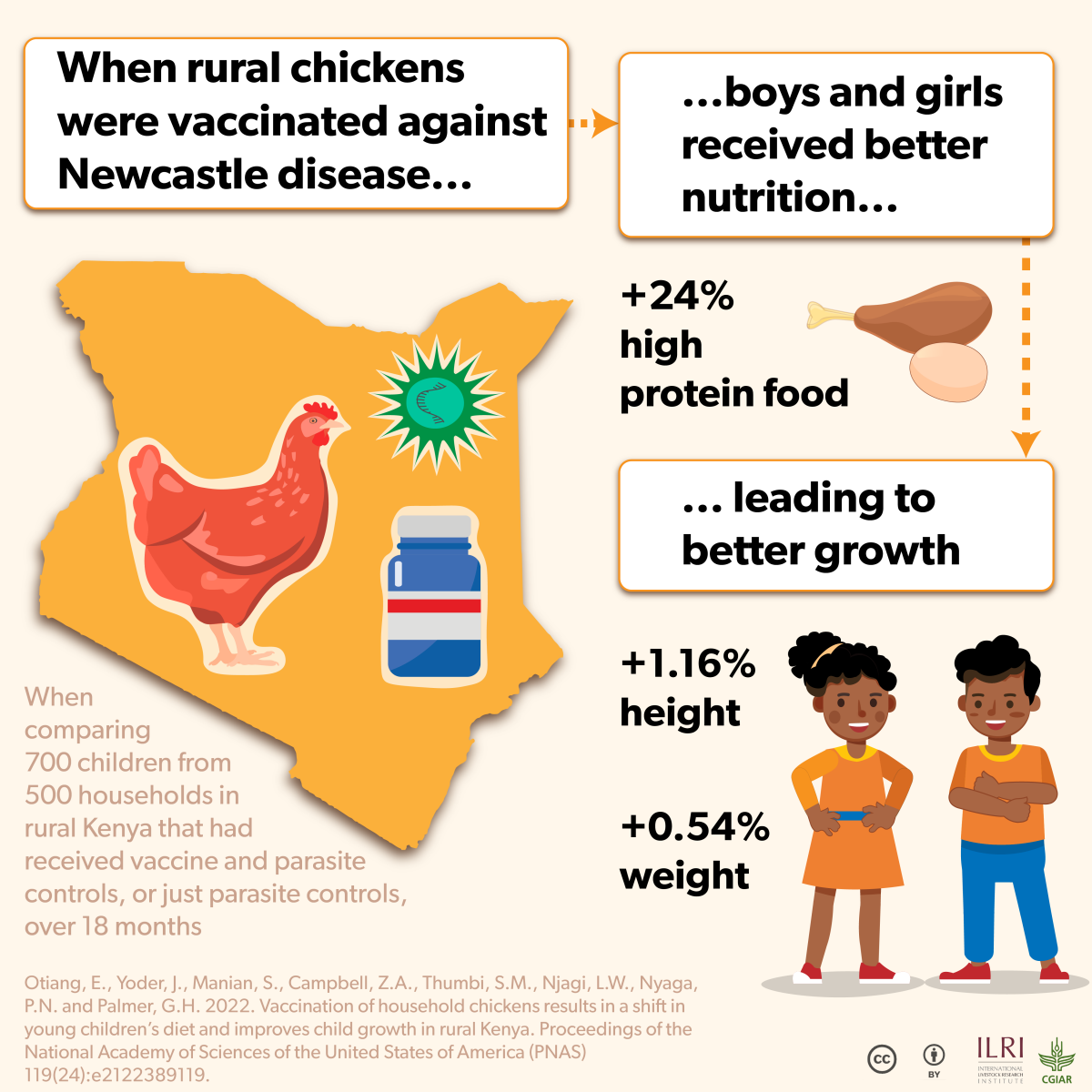 Over the course of the 18-month study, children in homes where the Newcastle vaccine was used were shown to consume 24% more high protein foods and improve their height for age, the key metric for assessing childhood stunting. Children from vaccinated households saw a 1.16% increase in height compared to those who were not vaccinated; weight was increased by 0.54%.

“This study is impactful as it shows that a low-cost intervention on a commonly held animal livestock resource can translate to improved childhood growth—in line with the United Nations goal to dramatically reduce child growth failure," said Dr. Guy Palmer, WSU’s senior director for global health and professor in pathology and infectious disease. “Notably, decisions regarding chicken flock management and child diet are both under the control of women in many rural settings, providing a direct pathway to improve nutrition and growth.” Palmer helped coordinate the study with fellow WSU professor Jon Yoder.

Otiang said the research is particularly significant because the vaccine is relatively affordable and widely available, including in Kenya. It gives Kenyans an opportunity to improve the health of children and animals using existing resources without major lifestyle changes or financial burden.

Dr. Zoë Campbell is a gender scientist at the International Livestock Research Institute. She explains, “Technology doesn’t always benefit everyone equally, so it is great to see evidence from this study that girls are equal beneficiaries of increased consumption of animal-sourced foods and improved growth scores as a result of the veterinary intervention. This is a good start towards understanding how livestock and veterinary interventions may affect food availability and allocation within households.”

“It’s important because it gives a unique linkage to the health of humans and animals,” Otiang said. “As a veterinarian, it’s been a very interesting journey working with animals and linking it to human health – not only on the disease side but on livelihoods, nutrition and socioeconomics; this study provides information so we can improve in those areas.”

[N.B. This press release was originally written for publication in Eurekalert, by Josh Babcock, of WSU College of Veterinary Medicine Communications and appears with approval and minor alterations here.]