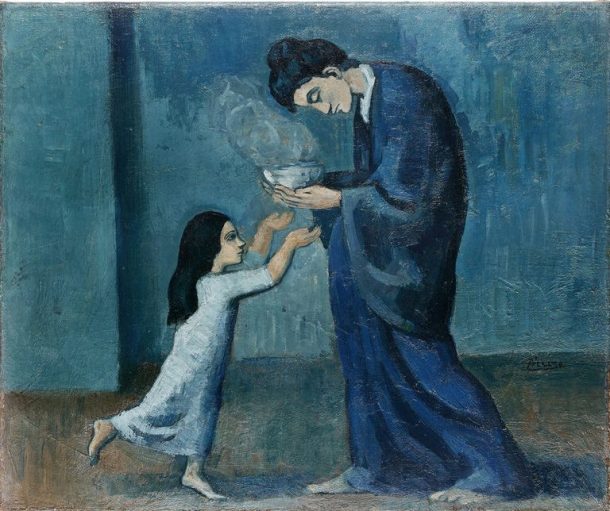 Pablo Picasso, La Soupe, 1902.
(From a description about this work by 1000Museums: ‘The older woman appears physically weighed down by her destitution. She stands, arms stretched out, holding a bowl of soup; a small child also holding the same bowl. A question is conveyed: is she giving the soup to the small child or receiving it from her? Picasso bases the act of selflessness and charity upon the basic need for nourishment, intertwining the two.’)

The global food system is headed for failure, with potentially catastrophic consequences for all people, nations and for civilization as a whole, a new report warns.

The Commission for the Human Future’s second round table conference on global threats and solutions has called for a worldwide effort to transform global food production to a system that is renewable, healthy and fair to all.

The Commission’s report comes as the United Nations warns that world food supplies are failing and the Covid19 pandemic is making matters worse. . . .

[D]iet-related disease has become the greatest killer of our age and, in the medium term, the food supply is imperilled by scarcities of soil, water and nutrients, genetic narrowing and climatic instability, the Commission’s report says. . .

The report outlines a range of growing threats to food security, from resource scarcity, climate change, the failure of agro-ecosystems and a commodified industrial food system designed for profit, not to nourish humanity.

In its second part, the report outlines solutions and ways to build a renewable world food system. These include growing far more food in cities and the deep oceans and converting extractive farming to regenerative agriculture.

In particular, it urges the adoption of ‘circular food economies’ where key resources such as water and nutrients are continually recycled, and not wasted as at present. . . .

The study also warns that, if humanity is to continue to have enough food, action must be taken to flatten the human population growth curve. . . .

Reshaping our food supply . . . offers an unparalleled opportunity to reshape our world.

It is also an opportunity for humanity to unite around something we can all agree on: our need to eat, safely, healthily and renewably, every single day.”

The Commission will shortly release a second report from the Roundtable discussion, focussing on policy changes and opportunities for Australia in the food sphere.

From the conclusion to the report
‘. . . The Commission for the Human Future sees solving the food problem as integral to solving all 10 catastrophic and existential risks that together constitute the greatest emergency humanity has ever faced in its time on Earth. If we can solve food, we can also make real progress in solving other threats, such as climate change, global poisoning, pandemic disease, wars, resource scarcity, overpopulation and species extinction.

‘Food is the fulcrum on which a systems approach by humanity to overcoming our greatest threats turns. It is also an issue that involves everyone personally, not just governments or corporations. Reshaping our food supply offers an unparalleled opportunity to reshape our
world, to one that can sustain, heal and feed us far into the future. It buys us time to manage our population back to a level the Earth can support. It offers a chance to restore the vanishing world. It promises more peace, fewer wars and migration crises. It is a worthy challenge for each of us, not just for countries or enterprises.

It is also an opportunity for humanity to unite around something we can all agree on: our need to eat, safely, healthily and renewably, every single day. It is a model for how we must conduct ourselves in future if our civilisation and species are to last.

Food is one of the greatest expressions of human creativity and care ever devised by our kind.

It is worthy of a special, universal and collaborative effort to rethink food—one which can lead us to a safer, saner future on a healthy, blue and green Planet.