Global One Health initiative recognizes ILRI as a long-standing partner

The International Livestock Research Institute (ILRI) has been recognized as a long standing partner of the Ohio State University Global One Health initiative (GOHi). ILRI was recognized for its role in helping the initiative achieve its mission of expanding capacity for a One Health approach via applied education, training, research and outreach to address causes and effects of diseases more effectively at the interface of humans, animals, plants and the environment.

Speaking during a ceremony to celebrate 10 years of the initiative on 9 September 2021, Wondwossen Gebreyes, the executive director of GOHi, said that ‘ILRI is one of the founding members of GOHi and in the early phases when we launched the Veterinary Public Health and Biotechnology (VPH-Biotec) Consortium, a predecessor of GOHi, ILRI was the key facilitator for the consortium regionally by reaching out and facilitating travel to Tanzania, Kenya and Ethiopia.’

ILRI also helped GOHi in building the capacity of its fellows in the early stages as VPH-Biotec through the Biosciences eastern and central Africa (BecA-ILRI) Hub, which further strengthened the partnership. Wondwossen noted that ILRI has also ‘played a critical role through the BecA-ILRI Hub fellows in the NIH Forgaty D43 program from Tanzania, Kenya and Ethiopia who were hosted at ILRI Nairobi, co-leveraging fellowship resources and utilizing the Hub’s state-of-the-art genomic sequencing facilities.’

Speaking when receiving the award on behalf of ILRI, Hung Nguyen, co-leader of the Animal and Human Health program at ILRI, thanked GOHi for recognizing ILRI’s contribution to the global One Health vision.

‘We have been partnering with GOHi for the last 10 years in areas such as food safety research and One health training. The TARTARE project is the most recent and a key highlight of our ongoing partnership,’ said Nguyen. TARTARE is working on understanding the burden of foodborne diseases caused by key pathogens in raw beef and dairy in Ethiopia and promoting the use of risk-based approaches to improving food safety.’ ILRI has contributed to Ohio State’s Global One Health summer institute and the two organization have jointly participated in the animal health working groups led by the government of Ethiopia and in the One Health strategy for Ethiopia.’

‘The partnership between GOHi and ILRI has been mutually beneficial for both organisations and has enabled the two to grow together and have an impact in the One Health space,’ Nguyen added.

You can watch the recording of the celebration event here, ILRI is called to receive the global partnership award from 1:08:31 of the video. 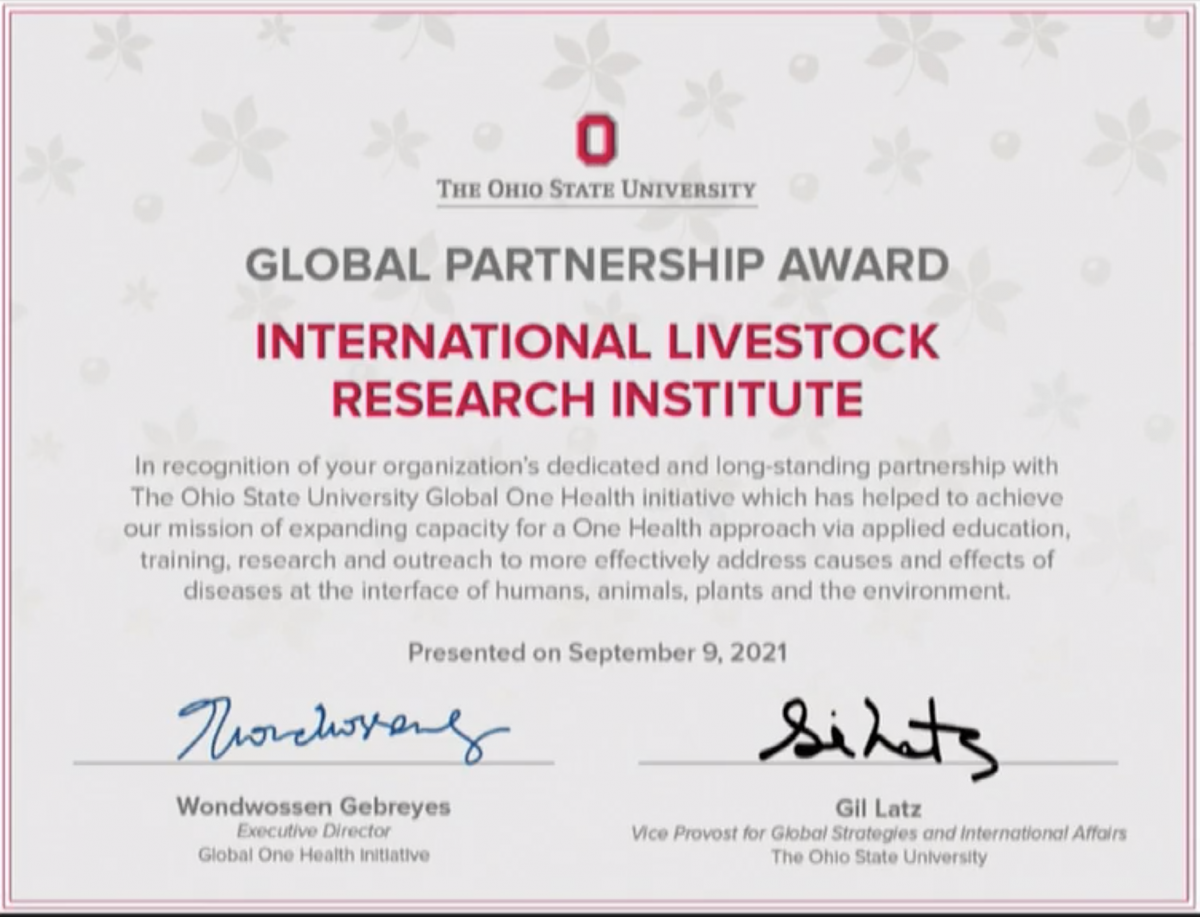 A copy of the certificate presented to ILRI by the Ohio State University Global One Health initiative (photo credit: ILRI).

END_OF_DOCUMENT_TOKEN_TO_BE_REPLACED

Emerging and re-emerging zoonotic diseases such as Middle East respiratory syndrome coronavirus, Ebola, rabies and avian influenza pose a major threat to humans and animal health globally. These diseases may have a wildlife reservoir or involve domestic animals. In Southeast Asia, continued losses...

Capacitating One Health in Eastern and Southern Africa (COHESA)

The world is facing unprecedented, inter-connected threats to the health of people, animals and the environment. Addressing these threats requires cross-sectoral, system-wide approaches. This is encapsulated in the One Health concept, which recognises the interconnection of people, animals, plants...