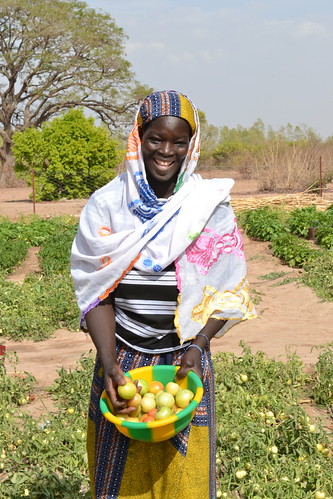 ‘This tomato (Rio Grande) is the best! It gives the best yield, has the best fruit quality—large size and smooth fruits, and its hard skin reduces chances of damage during long distance transportation. It also matures much earlier than the local varieties that we typically grow,’ says Sitan Coulibaly from Madina in Bougouni District, southern Mali.

Different tomato varieties were offered to smallholder farmers there by Africa RISING for participatory variety selection and evaluation during the 2017/18 cropping season.

Over the past six years, Coulibaly has been one of the 114 women farmers involved in Africa RISING activities implemented by the World Vegetable Center to validate high-performing, dry season-adapted and farmer-preferred vegetable varieties as a pathway for improved nutrition and income for families in Bougouni and Koutiala districts in southern Mali.

During the recent dry and cool season from October 2017 to April 2018, she and other farmers took part in on-farm variety evaluation and demonstration trials on different varieties of tomatoes, African eggplant and Okra. While the demonstrations took place in the Africa RISING technology park in Madina, the farmers (based on their observation of the varieties in previous seasons) picked their preferred varieties to try and grow them in their own farms and evaluate them in terms of yield performance, disease-resistance and taste.

As part of the evaluation, Coulibaly received tomato seeds (variety Rio Grande) from the project team which she planted in a 20 m² plot from which she harvested a total of 83.2 kg of tomato fruit for variety Rio Grande (41.6 t/ha). This was beyond her imagination as she had been accustomed to only harvesting about 40-50 kg of tomato fruit from the same plot when she grew the local varieties.

Figure 1. Yields (t/ha) and days to flowering of tomato varieties in the demonstration trials conducted by Sitan Coulibaly during the 2017-2018 dry season in Madina village of Bougouni District, Mali.

‘My neighbours who also grew this variety have the same reaction too. In fact we agreed that we will all grow this variety in the coming season,’ she explains. ‘We are hoping that the seeds for this variety will be easily available next season so that we can do so, because access to vegetable seed has been a challenge for us.’

Coulibaly also says that the training given by the project team on good agricultural practices for vegetable production has been key in ensuring she got the good harvest. ‘Planting a good seed is just one part of the process, you have to combine it with good farming practices to get great results!’ she emphasizes.

Through interventions like this one, Africa RISING is working to intensify the cereal- legume-vegetable cropping system in the Sudano savanna zones in southern Mali particularly in the dry season. The vegetable value chain in these regions faces diverse challenges that hinder optimum production and major constraints include low productivity due to low genetic potential of vegetable varieties which are unsuitable for intensification and poor crop management practices by smallholder farmers.