Skip to main content
Got a spare 5 minutes to help us improve our website?
I'll do itNo thanks
8 min.

A monthly round-up of recent articles, blog postings and tweets about livestock, aid and other topics that may be of interest to International Livestock Research Institute (ILRI) staff and partners, compiled by David Aronson. (This is a dual month issue of Thursday Links in anticipation of the December holidays.)

This is a good long-form article on how climate change will affect Africa. The bottom line: It will be bad. One example: Temperatures are predicted to rise by five degrees or more in those parts of Namibia, Botswana and Zambia that are already intolerably hot. Africa’s mega-cities will also be hard-hit, in ways that remain as difficult to imagine as they are to predict.

African agriculture will be particularly affected by climate change, as this interview with Abir Lemseffer, the Director General of the Initiative for the Adaptation of African Agriculture to Climate Change, makes clear. She deplores the lack of investment in helping African farmers adapt to the coming challenges: ‘On finances, we saw that only five per cent of the climate funds go to the African Continent. Why? Because agriculture was seen then as a threat. It was labelled as the cause of climate change and not as a solution’.

One of the challenges in accounting for livestock’s impact on climate change is that cows mostly emit methane, which is both more powerful and less long-lasting a greenhouse gas than carbon dioxide. Because CO2 is the most common greenhouse gas and the leading cause of global warming, other gasses are typically expressed in terms of their ‘CO2-equivalent’ global warming potential. This article from Oxford Martin argues such measurements misrepresent the impact of short-lived climate pollutants, such as methane, on future warming.

In more hopeful news, scientists in Australia report that adding a one percent dollop of seaweed to cows’ feed cut by two-thirds the amount of methane they belch.

An analysis of the affordability of the EAT/Lancet’s proposed global reference diet suggests it is simply unaffordable for the world’s poor. Here is a VoxDev write-up of that article.

The Eat/Lancet diet proposal spurred a massive social media backlash on Twitter, as users from wealthy countries pushed back against many of its claims.

Farmers in Nyandarua County, Kenya are pouring out milk, citing low prices and lack of access to markets due to roads rendered impassable by heavy rains.

Ethiopia has a Nobel Prize and a roaring economy. Can it also gain a food secure future? This is a good overview from Izabella Koziell, CGIAR Research Program on Water, Land and Ecosystems (WLE).

A good piece from our IFPRI colleague Vivian Hoffman on what we need to do to get aflatoxin out of Kenya’s food supply.

The UN says that famine threatens the lives of up to 5.5 million people in South Sudan, where droughts and flooding have destroyed crops and livestock, compounding intense political instability. 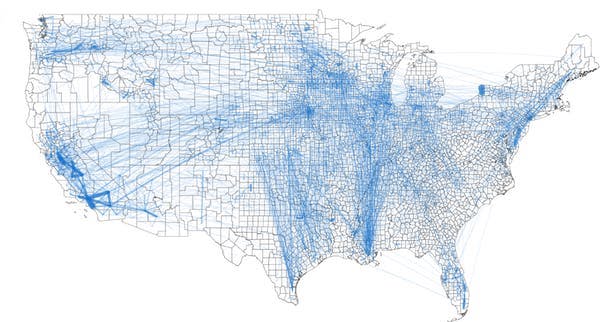 A fascinating map of how food travels from farms to homes within the United States. Credit: Environmental Research Letters (2019), CC BY-SA

A startup just announced the world’s first fake-meat “steaks” made from fungi. ‘While most alt-meat products, from veggie patties to fake-chicken nuggets, approximate the finely minced texture of ground meat, Meati strives to emulate whole animal muscle. The result is geared more toward the steakhouse than the drive-thru.’

However you feel about them, meatless meats are coming—assuming people are willing to eat them. This article explores what happened after one rural Brazilian school went meatless: ‘There would be threats. Furious parents. A battle over science. Eventually, the federal government would get involved’. In another article on the new-fangled non-burgers, a contributing writer for the New York Times tries out the fake burgers on her 91-year old father-in-law; he finds them completely acceptable, leading her to declare our meatless future is at-hand.

Meet the wizard chemists making food ‘craveable’: This is a deep dive into how the alt-meat companies impart meat flavour to their plant-based burgers, among other tricks.

This article is a good run-down on the debate over whether red meat is good for you or not. “This debate offers a nice example of the difference between what we want to believe and what we can really know,” says John Ioannidis, a Stanford medical professor. This BBC piece asks similarly whether it is better to drink cow’s milk or dairy-free alternatives.

Speaking of which, why is it so hard to figure out what people should eat to be healthy? ‘Most diet trials in the best journals fail even the most basic of quality control measures’ says the NYTimes. And it can’t help that a lot of the science is funded by corporate interests, such as recent cholesterol studies that may have over-promoted the sunny side of eggs.

A new book argues that ancient humans had surprisingly diverse diets—and that there’s no compelling biological reason we need to remain as carnivorous as we are.

People are happily eating bugs in the Congo, as The Economist reminds us, calling the grasshoppers and grubs that routinely form part of the diet there ‘creepy superfoods’ that are rich in protein and magnesium.

Vegans ‘need to be aware of B12 deficiency risk’—but only if they remain vegan for a period of years.

A team of scientists wrote a letter to the Lancet saying we need to start reducing our consumption of livestock immediately if we are to save the planet. ‘Countries should be looking for peak livestock within the next 10 years’, said Helen Harwatt, a fellow at Harvard Law School in the US and lead author of the letter. ‘This is because we need steep and rapid reductions in greenhouse gas emissions, as we are reaching dangerous temperature tipping points’. (This is a different initiative from the EAT-Lancet diet that received so much publicity early in the year.) 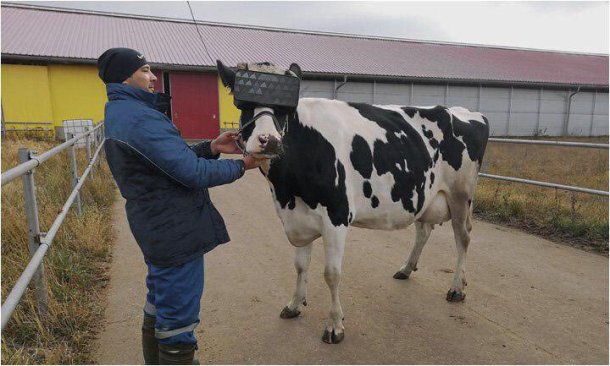 A Moscow farm has equipped its cows with virtual reality glasses in order to relax and feel happier. A calm environment leads to an increase in milk yield, so the cows are given a VR headset displaying summer fields.

The US federal government is shutting down a surveillance program for dangerous animal viruses that someday may infect humans. Ending the program, experts fear, will leave the world more vulnerable to lethal pathogens like Ebola and MERS that emerge from unexpected places.

An interview with a climate change communication specialist on what we know about the science of communicating science. How do we get people to believe scientists? TL;DR: ‘It isn’t by giving people more scientific information. Rather scientists need to talk about the values that motivate them and shape the science they do’.

Piglets in Germany may be about to achieve legal recognition as legal entities, capable of standing as their own plaintiffs in lawsuits. This particular case focuses on whether male piglets can be castrated without anaesthesia, but the implications could be wide-ranging. Meanwhile, Danish pigs are raised almost entirely without anti-biotics, in sharp contrast to their American brethren.

The lowly beagle is the dog breed of choice patrolling America’s international airports for illicit ham sandwiches, potential carriers of African swine fever. Customs officers at Dulles Airport alone (in DC) report seizing some 100 to 400 pounds of food each day, most of it apples, mango, citrus, beef and pork.

Cows can be an essential part of a functioning ecosystem, as these two articles show. One documents how feral cattle in Blenheim Estate are trampling down the bracken that chock off new tree growth. And this BBC video shows how one farmer in Georgia (USA) is using his herd’s instinctive behaviour to trap carbon in the soil.

The University of California professor who penned the enormously influential essay on the ‘tragedy of the commons’ fifty years ago turns out not to have been a particularly nice fellow. Also, his argument was dead wrong, says this article in Scientific American.

Here are two photo essays, one in colour, the other in black-and-white, on the austere beauty of Mongolia’s steppes, its vast emptiness of land and sky punctuated by tiny-looking herds of sheep or horses.

A lovely example of what you can do with video and livestock: This short, almost soundless documentary follows a lone migrant worker as he shepherds thousands of sheep in the Great Basin desert of the United States amid a formidable drought.

Memo: When it comes to effective communication, framing matters.

Cave art depicting human-animal hybrid figures hunting warty pigs and dwarf buffaloes has been dated to nearly 44,000 years old, making it the earliest known cave art by our species. The artwork, which was found in Indonesia, is nearly twice as old as any previous hunting scene.

END_OF_DOCUMENT_TOKEN_TO_BE_REPLACED

Mali's Mopti region is endowed with immense water and land resources generating for livelihoods for millions of families. The availability of these resources made the region an ideal environment for a thriving ruminant livestock farming. However, the region has recently been the scene of violent...

The project builds on lessons and insights from the Global Livestock Advocacy for Development (GLAD) project (2016–2019) that addressed three key problems: a growing negative view of livestock in industrialized nations, low attention to the sector in wider agricultural and broader development...