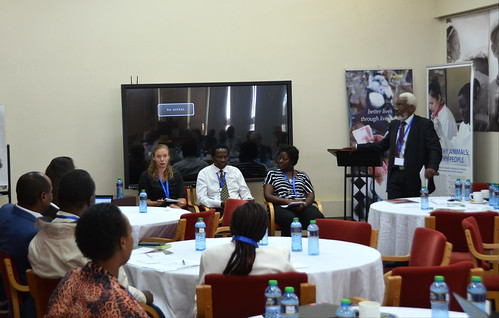 Erastus Kang’ethe (standing) facilitates a panel discussion at the ‘Growing with Dairy’ meeting. The panel members (left to right) are Johanna Lindahl from ILRI, Humphrey Mbugua from the Association of Kenya Feed Manufacturers and Margaret Aleke from the Kenya Bureau of Standards (photo credit: ILRI/Emmanuel Muunda).

Representatives from the dairy sector in Kenya met at the Nairobi campus of the International Livestock Research Institute (ILRI) in March 2018 for a one-day meeting organized to present the research findings and plans of two dairy projects that ILRI is undertaking in collaboration with other partners: Measuring and mitigating the risk of mycotoxins in maize and dairy products for poor consumers in Kenya (MyDairy) and MoreMilk: making the most of milk (MoreMilk).

Presentations by the principal investigators of the MyDairy and MoreMilk projects discussed various activities and interventions aimed at improving the dairy sector in Kenya and boosting the health and economic benefits that Kenyans derive from the sector.

The meeting also provided an opportunity to disseminate research findings, receive feedback on ongoing and planned activities, and align project objectives with the needs of public and private actors in the dairy sector in Kenya.

The MyDairy project was funded by the Ministry of Foreign Affairs, Finland and implemented between 2012 and 2018 in two phases: an initial four-year phase followed by a second phase of 1.5 years. The project aimed at mitigating the risks of aflatoxins in the dairy value chain in Kenya.

The MoreMilk project is a five-year initiative (2016–2021) funded by the Bill & Melinda Gates Foundation and the United Kingdom government that works to upgrade milk hygiene and quality standards in the informal dairy value chain and maximize economic, health and nutrition benefits, especially for the poorest communities in Nairobi.

END_OF_DOCUMENT_TOKEN_TO_BE_REPLACED

The project aims to build on the Feed the Future Innovation Lab for Small-Scale Irrigation (ILSSI) Phase I work of validating and promoting sustainable small-scale irrigation technologies to produce irrigated fodder in the smallholder systems and help bridge seasonal feed shortages. The...