Surveillance of livestock diseases is key to reduce their harm to livelihoods, development and even humans. Meat inspectors in Uganda are using the Open Data kit (ODK) tool to improve animal disease surveillance and reporting, and sharing their experiences and knowledge with peers. The tool was rolled out at a training workshop held in October 2021 at the Makerere University College of Veterinary Medicine, Animal Resources and Biosecurity (COVAB). The workshop aimed to boost, retool and equip inspectors in routine meat inspection procedures, hands-on skills in meat hygiene and food safety procedures, and knowledge of meat inspection regulations and standards. The two weeks of training was organized by the Boosting Uganda’s Investment in Livestock Development (BUILD) project funded by the German Federal Ministry for Economic Cooperation and Development (BMZ), and co-implemented by the International Livestock Research Institute (ILRI) and the Ministry of Agriculture Animal Industry and Fisheries (MAAIF). The training was attended by 40 meat inspectors.

On March 24, 2022, a follow-up meeting was held with meat inspectors from 31 of Uganda’s 135 districts to share experiences, review and improve the ODK tool.

How ODK works
ODK is an open-source mobile data collection platform that enables users to fill out forms offline and send data to a server when a connection is found. Once on the server, the data can be viewed, downloaded and acted upon. In the first six weeks following the training, the meat inspectors had uploaded more than 300 reports to the ILRI server. Collected data can be used to determine prevalence of diseases, locations and age-group of animals affected, and inform response. 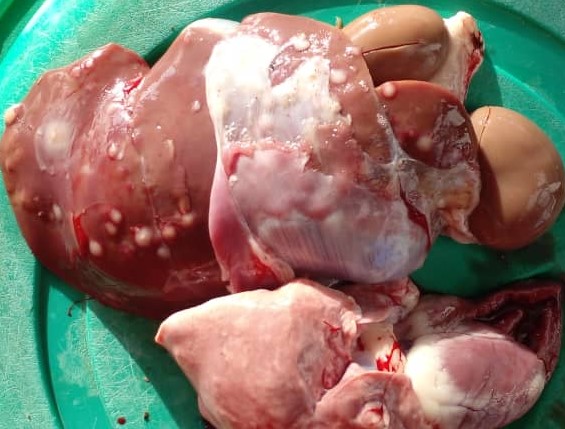 Speaking at the review meeting, Annie Cook, a senior scientist at ILRI, commended the inspectors for their interest in improving the reporting of data on disease surveillance at the points of slaughter, saying:

'As pioneers at using the ODK tool in the meat inspection sector, your feedback and input is important in refining the tool so that it is useful and can be used in the future.'

Experiences using ODK
Reporting their experiences, the meat inspectors noted that the tool was user-friendly and most did not have major challenges in uploading data. They did however identify some areas for refinement to improve user-experience and data quality. It was reported that the form is too lengthy and since a separate form is filled for every animal, it makes data entry inconvenient, especially in locations with high slaughter volumes. To reduce the workload, it was proposed that one form is used to capture all animals slaughtered and conditions observed at a location, or for every animal species, per day. However, while grouping may ease reporting, it may result in exclusion of key information such as traceability.

To provide comprehensive information and determine the percentage of diseased animals, it was proposed that data collection should cover the total number of animals slaughtered at a facility be captured and not only those that are diseased.

As part of the reporting, the inspectors are required to upload copies of the animal movement permits, as well as photos of any abnormal conditions observed. This unfortunately slows down the system and affects reporting. It was agreed that attached files be reduced to a size that would not critically slow down the app.

Other challenges
While some of the challenges faced in the sector could be addressed by refining the tool, others need to be addressed at operational or institutional levels. Inspectors reported that tracing sources of animals, especially when they are diseased, is a challenge. This is because in most cases, sick animals are not taken to a central slaughter facility, while other locations receive already-slaughtered animals. This is compounded by the fact that some locations do not have a central slaughter facility. All of which may result in some diseases being missed, and therefore what is reported is not representative of the situation on the ground.

Disease surveillance and traceability is further hampered by absence of genuine animal movement permits. When animals are destined for different locations but are transported aboard one vehicle, the movement permits usually end up at the last destination. Also, once at the slaughter facility, animals are not slaughtered on a first in-first out basis but depending on trader preferences and purchases. During this time, they are kept in the same kraals with those from other locations, thus exposing healthy animals to diseases should there be a diseased animal, and at the same time making it difficult to determine the sources of the disease.

Cases of community members consuming condemned carcasses were reported. This not only exposes the human population to zoonotic diseases but may also introduce diseases to communities where they previously did not exist.

Way forward
There is need to train more people and build their capacity to use the tool. To provide for checks and balances, the inspectors proposed that levels of reporting be created; for example, data from a district should be cleared and submitted by a central office. This will improve reporting and response; in case a disease is identified.

The status of pig welfare in selected districts of Uganda: Implications for health and productivity interventions

END_OF_DOCUMENT_TOKEN_TO_BE_REPLACED

To build transition scenarios that can mobilize all actors involved in animal health management; To find solutions that are adapted to the local context; to contribute to harmonize trends and dynamics towards prudent use of AMs in farmed animals. Contact: Dr Flavie Goutard (CIRAD), E-mail: flavie...