How viable are schemes to give poor people making and selling ‘informal’ milk greater market access? 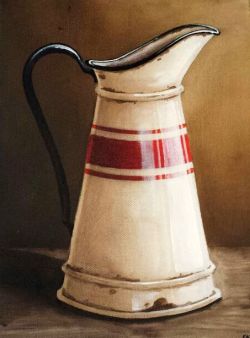 Artworks on this page: Various Jugs, by Katie Grobler.

A new report from the International Livestock Research Institute (ILRI) and the International Institute for Environment and Development (IIED) reviews the effectiveness of training and certification schemes designed to give small-scale ‘informal’ sellers of ‘raw’ and/or boiled or informally pasteurized milk and (in India) milk sweets greater market access in East Africa and South Asia.

The report reviews such schemes in Kenya and Tanzania and in the state of Assam, in northwestern India. In all three countries, the informal sector dominates dairy marketing and trade and informal milk production and trade contribute significantly to the employment, livelihoods and nutrition of many millions of poor people. 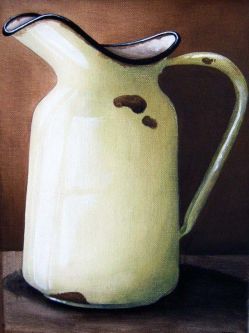 From the executive summary
‘This paper reviews the status and policy contexts of informal milk markets in Kenya, Tanzania and Assam (India) to better understand the opportunities for a policy innovation based on training and certification to overcome market access barriers for sellers of informal milk by improving the health and safety practices of informal milk traders, thereby addressing policymakers’ concerns. It is based on an extensive review of available literature and a small number of expert interviews and contributions.

‘Informal economic activities have been defined as those that operate outside the formal reach of the law or where the law is not applied or enforced, or where the law discourages compliance because it is inappropriate, burdensome or imposes excessive costs (White and Aylward 2016). However, as in other types of informal markets, informality in milk markets is not a black-and-white phenomenon. Small-scale milk businesses operate at different points along a spectrum of informality—with those selling raw milk without any of the required licences at the more informal end of the spectrum and those selling only packed and industrially pasteurized/ultra-heat treated milk with all necessary licences at the formal end. Other measures of formality/informality include the type of labour, relations with suppliers or access to finance and credit (White and Aylward 2016).

‘Milk production in the three countries is predominantly informal and small-scale. Dominant farming systems in Kenya, Tanzania and Assam are smallholder-led sedentary farms and pastoralists.

Large volumes of milk are produced in all three countries and significant volumes are consumed on farm. The informal sector usually pays more to producers than the formal sector and pays in cash on collection—a key attraction.

‘Industrial milk processing in all three countries is largely under-developed. In Kenya, the market is highly consolidated , with Brookside Dairy Limited and New Kenya Cooperative Creameries Limited processing 75% of all milk, and there is some market concentration in Tanzania. Obtaining sufficient volumes of milk is a key constraint to growth of the industrialized processing sector in all three countries. Smaller and micro-scale processors are emerging in Assam and Kenya in response to the government push for pasteurization.

The geography and size of all three countries and poor infrastructure make marketing challenging. A lack of cold chain facilities means the milk must pass through a short chain to reach the consumer to maintain its quality.

Low-income consumers dominate consumption of informal milk (chiefly raw and/or boiled, or informally pasteurized, or in the case of India, solid milk-based products such as sweets, ghee and paneer).

‘Rates of consumption among low-income consumers are still lower than the recommended rates of per capita consumption. Price, quantities available to purchase, perceptions of freshness and fat content, convenience and accessibility drive the preference for raw milk.

Health hazards are associated with milk consumption. But, due to prevalent boiling practices in all three countries (with the exception of African pastoralist communities), many of these hazards do not translate to actual risks.

Informal milk production and trade contribute significantly to employment and livelihoods of poor people, as well as nutrition. In terms of price per unit of protein, milk typically represents better value than other domestic animal products.

‘However, legitimate health and safety concerns exist for milk since it is highly perishable and can contain disease-causing parasites, bacteria, antibiotic residues and aflatoxins. Some of these cannot be eliminated by any form of heat treatment (including pasteurization) and are determined at the production node of the chain (for example, antibiotic residues and aflatoxins).

Informality poses significant challenges to policymaking. Our review has shown that current policy approaches are poorly equipped to address the persistent reality of informal dairy markets.

Informal trade of milk and dairy products in Kenya, Tanzania and Assam shows no signs of abating, and yet policy offers either unrealistic—and unachievable—standards to force a move towards formalization in the form of pasteurization, or neglect.

Neither of these options offers a path to dealing constructively with a sector that offers livelihoods and nutrition for millions, but that also suffers from public health issues.

Inappropriate policies may in fact increase the cost of milk to the disadvantage of consumers and may, paradoxically, decrease milk safety.

Training and certification schemes offer a glimpse of a possible policy alternative that reconciles the needs of governments for better oversight of the informal sector, of vendors for freedom of harassment and better livelihoods, and of consumers for affordability, taste and, if well implemented and grounded on positive incentives, safety.

‘These schemes were implemented in all three countries with varying degrees of success—in terms of impact, scale and sustainability. In Kenya and Tanzania, the initial promise shown by the schemes has not translated into long-term sustainability or scaling. In Assam, as of 2015, the scheme was still ongoing but some challenges in recruiting and retaining participants had been reported. Evidence on the impact of the scheme in the respective countries shows some improvements for businesses in terms of skills and quality control, but the evidence is mixed with regard to health and safety practices and income for vendors.

Our review suggests that training and certification schemes can provide win-win situations when they align the interests of different stakeholders, but that co-funding is often needed.

‘A number of challenges and constraints explain the inability of the schemes to be scaled and sustained, including unstable policy environments (changing attitude of government to informal players); absence of policy or wider social drivers; and a weak relationship between knowledge and practice—while knowledge and capacities were improved, these did not always or necessarily translate into changes in practice.’

Acknowledgements
ILRI scientists Amos Omore, Emmanuel Muunda, Ram Deka and Steve Staal reviewed this paper and ILRI communications specialist Tezira Lore edited it. The MoreMilk: Making the most of milk project is funded by the Bill & Melinda Gates Foundation, the CGIAR Research
Program on Agriculture for Nutrition and Health, and UK Aid from the United Kingdom government.

I went to Wuhan to investigate the origins of Covid: Here’s what we can learn from Huanan market