Netsanet Sitotaw, 25, is a young veterinarian and the owner of ‘Netsanet Sitotaw’, a veterinary clinic in Bahir Dar, in Ethiopia’s Amhara Region. She is the pioneer of a ‘public-private partnership (PPP) for vaccination services’, which is providing rabies vaccination services in the town and is secretary elect of the Amhara PPPs regional task force. 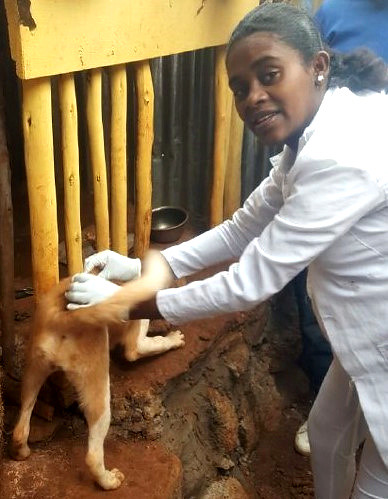 Her postgraduate research on rabies made her realize the seriousness of the disease and the reality of inadequate vaccination services in Amhara. ‘I struggled to get to the point where I am now,’ she says. ‘Four years ago, people were laughing at me for even thinking about giving door-to-door vaccination services. They were doubting my skills and ability as a woman to deliver vaccines’ says Netsanet. Before this, rabies vaccines in the region were provided by the government and residents only received the service if they paid for cost of transporting vaccines or paid for the full vaccine dose, which is used for five dogs at a time. To improve access to the vaccine, Netsanet decided to work with the Amhara Livestock Resources Development and Promotion Bureau and acquired a license for private door-to-door services.

It took her six months to get a licence for rabies vaccination after opening the clinic. Trying to change the common perception that ‘traditional medicine’ is better than vaccination was also another challenge in the first year of operation. Netsanet explains, ‘I am grateful now that business is thriving and people have started bringing animals to my clinic not only for vaccination but also for treatment; this is the result of my determination. Things can get tough and there might be no support in place.’ She added that ‘one should always be patient and focus on reaching their goal regardless of how long it takes.’

Netsanet provides rabies vaccination to 1,500 dogs a year. She maintains a positive relationship with the Amhara Livestock Resources Development and Promotion Bureau by providing timely reports on the number of vaccinated dogs each year. She also vaccinates dogs on behalf of the bureau when required.

Netsanet still faces challenges such as travelling from Bahir Dar to Bishoftu (about 550 kilometres) using public transport and taking the early bus to procure the vaccines and bring them safely home. There is also unfair competition where other private veterinary clinics have started providing rabies vaccines, often without a licence.

Ethiopia has a large livestock population. Accounting for a quarter of national GDP and 40% of agricultural GDP, livestock play a crucial role in the country’s development. But the growth of the sector has been low due to among other challenges, high disease prevalence and inefficient animal health service delivery. Lack of integration of the public and private sector is one of the main reasons associated with the poor veterinary service delivery. Veterinary services in Ethiopia are primarily provided by the public sector with clinics set up in many areas but the absence of appropriate policy has limited the involvement of the private sector.

In 2019, the Health of Ethiopian Animals for Rural Development (HEARD) project was established under the Ministry of Agriculture to improve veterinary service delivery in the country. The International Livestock Research Institute (ILRI) and the Ethiopian Veterinary Association (EVA) jointly implement the project component that is building the capacities of veterinary service providers. Part of HEARD’s work is to support the rolling out of a ‘veterinary service rationalization roadmap’ developed by the Livestock Value Chain through Public and Private Dialogue (LVC-PPD) project in 2014. The framework seeks to increase the participation of the private sector in veterinary service delivery by supporting context-relevant public-private partnerships in the country.

The task forces are responsible for identifying and addressing gaps in veterinary service provision, ensuring smooth implementation of HEARD project activities, establishing and enhancing working relationships between public and private service providers, and piloting and scaling out feasible PPP models using participatory approaches. They will also document and share best practices and lessons about selected working PPP models and other livestock service extension practices along the livestock value chain.

The formation of task forces on PPPs was proposed by both public and private service providers during a series of consultative workshops organized by ILRI and EVA in April and June 2019. These workshops identified and prioritized gaps in veterinary service delivery and participants proposed different PPP models for each region. Netsanet’s private vaccination service model was one of the models adopted by the task force. The other models include: 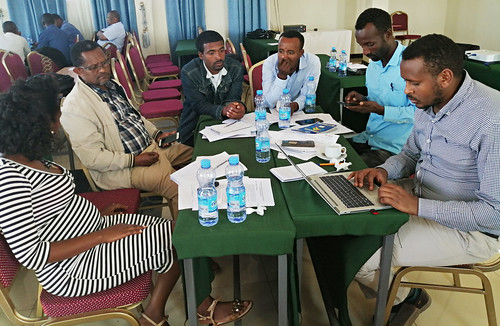 The HEARD project is led by the Ministry of Agriculture. ILRI and EVA jointly implement the second component of the project that is improving technical competences (knowledge, skills and attitudes) and incentives for veterinary service providers to deliver better and rationalized services. This component works in the Amhara, Somali and Oromia regions of Ethiopia.

Our ‘not just business as usual’ communications plan