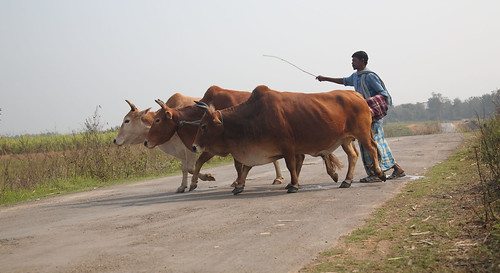 Rapid urbanization in India has led to expansion of peri-urban fringes, where intensive, industry-style livestock rearing has led to emerging vulnerabilities at the human-animal-environment interface.

To better understand the health system and farm-level factors that influence the risk of transmission of bovine tuberculosis in animals and humans, a qualitative study was undertaken among smallholder dairy farms in peri-urban zones in three cities in India: Guwahati, Ludhiana and Bangalore. Data were collected through literature reviews, expert consultations and in-depth interviews.

The study, published in BMC Public Health (March 2019), found that farmers consulted veterinarians as a last resort after home remedies and quacks had failed. Damage control measures, especially with respect to selling or abandoning sick animals, added to the risk of disease transmission.

Although civic authorities believed in the adequacy of a functioning laboratory network, end users were aggrieved at the lack of services. Despite the presence of extension services, knowledge and awareness were limited, promoting risky behaviour.

In addition, the absence of policies on the management of bovine tuberculosis may have influenced stakeholders not to consider it to be a major animal and public health concern.

“Evidence is needed not only about the burden and risks, but also on possible options for control applied in the local Indian setting,” the authors say.

The study also recommends that the identified gaps in knowledge be addressed through collaborative research and One Health interventions involving both animal and human health sectors.

Access the article Community, system and policy level drivers of bovine tuberculosis in smallholder periurban dairy farms in India: A qualitative enquiry by A.S. Chauhan and others.